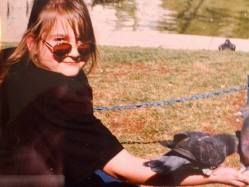 These pictures are from about a million years ago.

Back at the dawn of time – or 1993, if anyone’s counting – Nick and Sarah first began a pen-pal correspondence based on their mutual love and admiration of the Oz books, as written by L. Frank Baum and his numerous successors. It was vibrant territory for enthusiastic communication: both of them had read the Oz books hodge-podge, both of them were fascinated and a little confused by the realms of Oz fandom, and both of them liked to write their own stories (something Ozians young and old have been doing – and publishing – since the demise of the regular series).

Flash-forward twenty-five years and they’re still talking. They’ve grown up (slightly). They argue a lot more than they once did. They have become, unsurprisingly, two very different people. But they still love the Oz books – and it occurred to them, recently, that it’s been an awfully long time since they really talked about that.

BURZEE is a shared experiment. Nick and Sarah have decided to read all of the Famous Forty books in the original Oz canon (1900-63), along with related fantasies by the original, “Royal Historian” authors (chiefly L. Frank Baum himself). They’re going to read them at the approximate rate of one a month, and they’re going to talk about them. You can read along with them, and talk about them, too.

They have estimated that this will take roughly five years, by which point they will be Very Old Indeed.

There’s no time to lose then, is there? Come along with them into a magical world of fairies and enchantments, selfish kings and transformed princesses… back through the Forest of Burzee and straight on into OZ.

4 thoughts on “You are Entering the Forest of Burzee…”